I have finished the oven mitts - Hooray!! And just in time. It is 11.00 pm here and I need them for work tomorrow.


It promises to be nice and warm here in Melbourne for Christmas. We are going to my brother's place where the kids can swim and the adults can find a shady place to have a drink (or two...).


We had our first Christmas gathering up in Shepparton on the weekend where we all got to have lunch in the backyard. Some chickens and salads from the chook shop with chocolate ripple cake made by Sofie for desert. Perfect, except for all the mossie bites I have!


Here is a typical Aussie backyard lunch photo - even with the Hills hoist in the background..lol 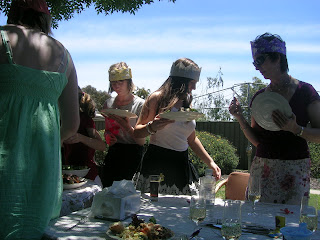 And here is mum, me, Cheryl, Tess (my niece) and Sofie. 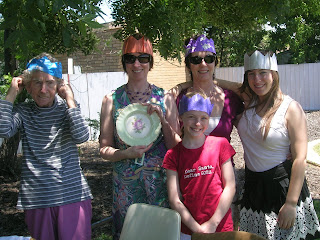 Have a very merry Christmas everyone!
Posted by Vicki at 11:04 PM 21 comments:

I am still in Christmas gift making mode and have made 2 aprons for my nieces Laura and Tess. Sofie helped me tonight with the sewing and pressing and Ellen did a little pose with Eames to show the end result. We used two pink and two green co ordinating cupcake cotton fabrics from Spotlight. No pattern was used. We made it up as we went. We made the ties long enough to come around to the front to tie. Some rick rack or trim would have been nice but none could be found! 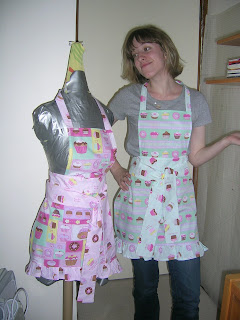 Here is a closer view of the pink one: 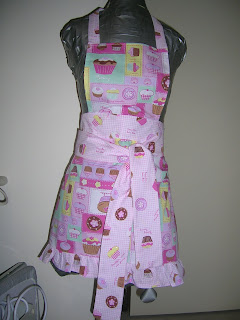 And an even closer view to show the fabric properly. There is silver sparkles on the fabric too. 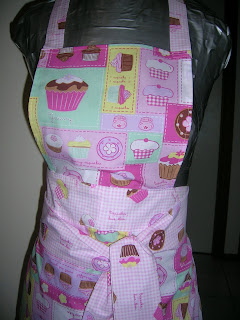 Since my last post I have made two more little boy sets and am half way through my mitt making. Note to self....do NOT leave it until the week before Christmas to start making gifts......

Every year I make something Christmassie for my co workers. We are only a small firm of accountants and this year we are all female except for the boss! Last year I made aprons (here too) and the year before table runners. This year it is oven mitts. I couldn't find a tutorial for exactly what I wanted so I just had a go and came up with this:

First, trace around your hand or trace a mitt you already have: 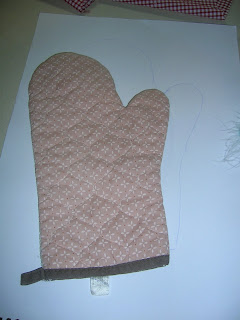 Next combine the outside fabric, batting and lining. I couldn't get any insulated batting so I just used poly. It is a bit thick but it should do the job. I could hold my hand against the iron for a few seconds before it got too hot, so I figure these will work for getting dishes out of the oven onto the bench top. I cut the 3 fabrics just long enough to fit one mitt length. I used the full width of the fabric. Easier to quilt that way. 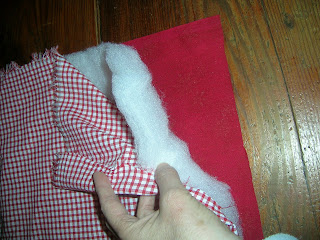 Quilt using the walking foot. I just did straight lines every 5 white lines of the gingham. Fancy quilting would be nice, but I am a novice in this area and this was all I can do! Roll up the fabric as you go to make it easier to fit with your machine. 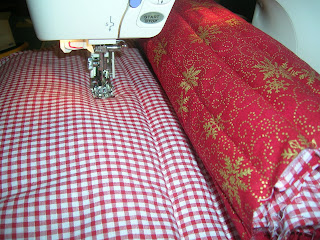 Cut two pieces from the pattern out of the new quilted "fabric". Cut one and then turn the pattern over to cut the other.
Make some binding. I used a co ordinating Christmas fabric with the 2.5cm wide binder. I cut the fabric on the straight grain to save fabric. It should be ok as I am not trying to go around curves. 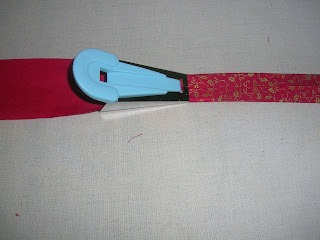 Fold the binding in half making sure one side is slightly longer than the other. 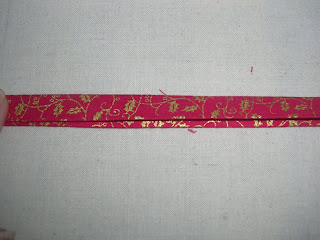 Sew up the thumb side at least a few inches before attaching the binding. 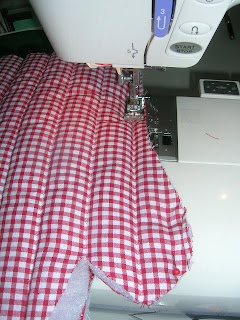 Attach the binding with the longer side underneath. This will ensure you will catch it in your stitches. 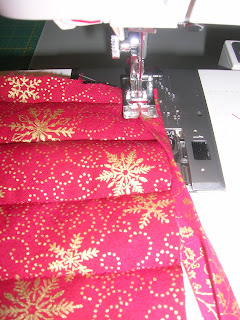 Sew a couple of extra inches of the binding to make a hanging loop. 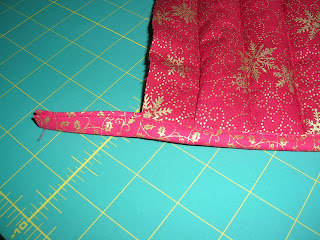 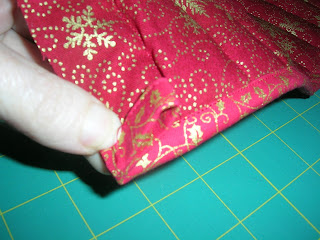 Here is the inside after I have finished. I didn't bother finishing off the inside. You could bind, zig zag or serge. I would have bound it I was making these for you ;)). But hey, I have 20 to make and my co workers will not care or even notice. Don't forge to clip to the stitching in the thumb curve to help it sit better when you turn it out. 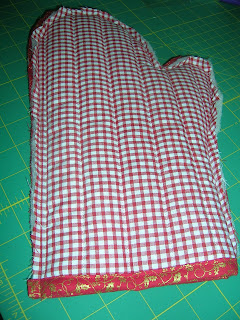 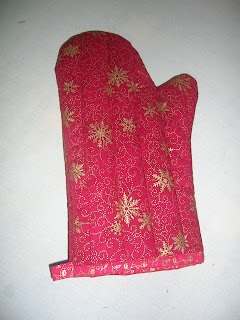 I saw this really cute Santa embroidery on Embroidables.com and thought I would have a go at making some pyjamas for some little boys. I haven't done much embroidery even though I have had my machine for about 8 years. I have a Janome MC10000.

The idea was to buy some white tshirts and and make little shorts. I looked high and low and couldn't find any white tshirts without logos. So in desperation I made a tshirt! I used a very old pattern that my sister gave me. I found it in amongst my children patterns in a plastic bag - no pattern envelope! Simplicity 5398 - Stretch and Sew. 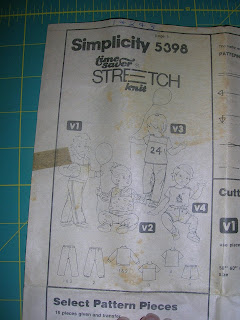 I made a size 2 for my grand nephew William. 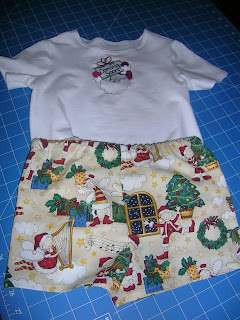 The old pattern sheet had lots of tips along the way. One of them was to put a bit of ribbon in the back so to be able to tell front from back. I know other bloggers have done this but this is the first time I have seen it mentioned in the pattern sheet. 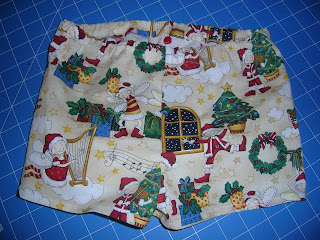 Here is a close up of the embroidery: 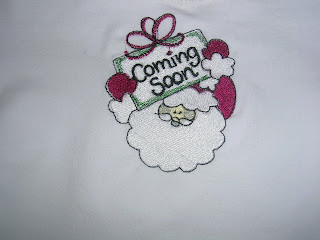 I want to make a couple more but will go and buy some white singlets! I don't want to have to make the tshirts again. The shorts only took about an hour.

Young William enjoyed getting them last night and ran around in them for a while but unfortunately he wasn't very co operative in the photo department.
Posted by Vicki at 8:59 PM 12 comments:

Australia (the movie) - a review

Last night the girls and I went to see Australia the new Baz Luhrmann film. The film has had more than its share of bad press but being Baz fans we just had to go. (Ellen's passion for film making was ignited by seeing Moulin Rouge when she was 11). I did have to almost force Sofie to come along as she really was not keen. Well, we all enjoyed it very much!

. The film really captures the essence of the outback - the seasons - the wet and the dry, the vastness and remoteness of the landscape.


. It is a fantastic history lesson, particularly for Australian school children. I am sure it won't be long before it is on our school curriculum. This year Sofie studied Strictly Ballroom - Baz's first film and also learnt in history about the "stolen generation". This film covers the Aboriginal culture in a very positive way. It also teaches us of the tragedy of the injustice done to them. I know my generation were not brought up to respect the Aboriginal culture but the schools now teach our children of their culture, the injustices done and to pay respect to them as the original owners of the land.

. The history lesson also covers the impact of the Japanese bombing of Darwin in 1941.

. The costumes that Nicole gets to wear! This outfit I think is my favourite: 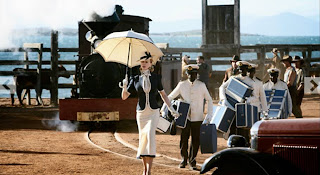 Here is a close up of the details of the cream and navy. 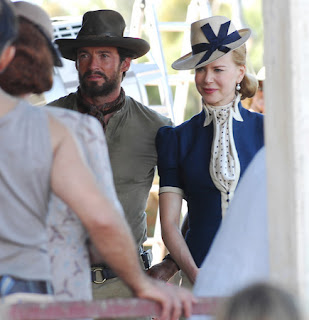 Princess Poochie has done a post about the shoes. I did notice the shoes in the movie but alas no close ups!

. It was a good yarn! Almost a "western" with the droving, the goodies and the baddies and the taming of brumbies. Baz starts this film in a very comical/farcical way similar to Moulin Rouge and Strictly Ballroom but then settles down into his story. Lots of fun with men fighting and general silliness. Also some shocking bits.......remember the kangaroo scene? Not sure to laugh or cry!

. Another fun thing was seeing all our great Aussie actors - Bryan Brown, Jack Thompson, Ben Mendlesohn, David Wenhan (he is so good you really hate him)...and lots more. It is a bit like spot the actor.

. We thought Nicole was perfect for the part.

. This film is just so Aussie!

. The only thing I would say was for me was it didn't quite drag me in. It was great to watch yet I wasn't moved to tears at any time. Yet watching the Duchess a couple of weeks ago I couldn't stop the tears - so I can be moved.

Fabric to me and more mother proudness!

On Wednesday Colette of Tessuti fabrics turned 40 and I won some fabric! How cool is that? Here is a photo of the goods along with the lovely labels she sent. I won on Wednesday and they were with me on Thursday! Thanks Colette! The silk/cotton on the far right has a lovely silky feel and I am thinking maybe a dress. The cotton in the middle is quite rough and course, so I am not sure what would be best for it. And the elephant fabric needs to be something for a little one. Perhaps a shirt for nephew Will for his 2nd birthday next Feb. 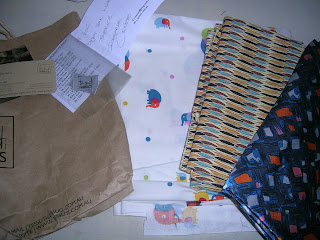 Also on Thursday we were invited to my girls Night of Excellence where they hand out awards to students for outstanding academic, community spirit, arts, music and sport achievements during the year. Both Sofie and Ellen got awards to community spirit (being involved in many school related activities). Ellen also go a house award but the biggy was the top student in media studies in VCE. She worked really hard all year and didn't lose one single mark! Mummy is very proud of both my babies. 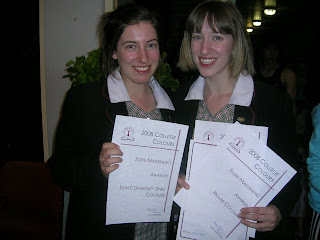 Ellen was also so proud of herself she slept in her school uniform with her medal under her pillow..lol! So now we wait until January to find out what placement she is offered at uni.
Posted by Vicki at 8:41 AM 11 comments:

Vicki
I'm a Melbourne girl who loves to create. 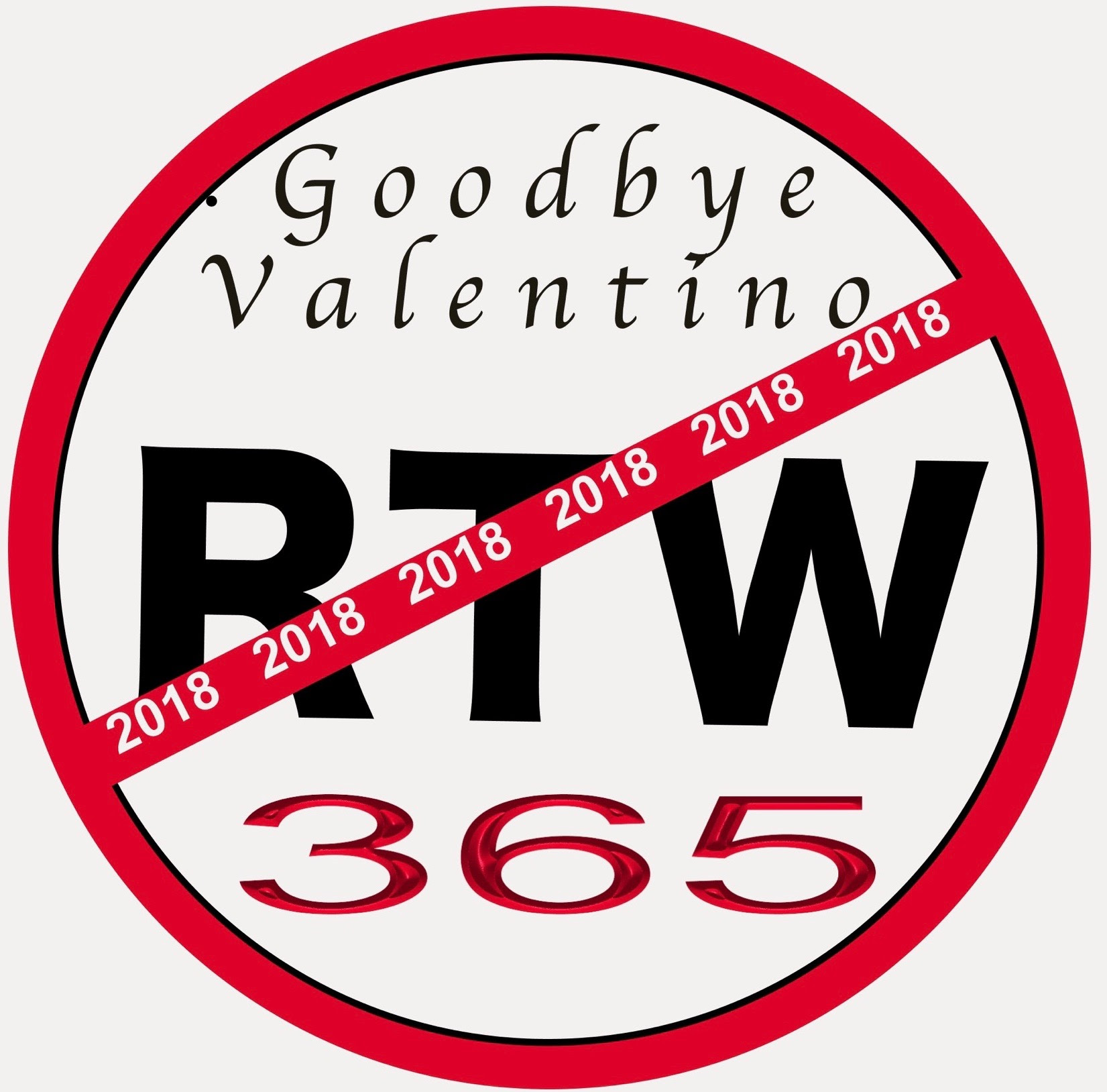